Have you ever seen one of these?

IT WAS NOT EFFICACIOUS.

THE MISSION WAS ABORTED.

It might as well have been in Sanskrit.  NOT a shopping list.  Nor a reminder, or even a handy reference.  Oh sure, it started with good intentions; tidy, organized, logical.  Then, noticeably at ‘Peppers – Any Colour’, Mom unilaterally decided that Dad would be assigned the shopping job, and bailed.  At that point it became nothing more than a dismissive cruelty delivered upon a fine and upstanding man – half Philanthropist, half selfless workhorse.  Unaware of the wily legerdemain afoot, he blithely intended to fulfill the list.

After a brief glance at it he regretted his assignment deeply.

Like the 7 dimensions above those we can sense as humans, handwriting at an angle is utterly invisible.

It is an abstract, theoretical construct only perceived by wives, or husbands with advanced mathematics training at the doctoral level.  Neil DeGrasse Tyson can see it.  His side business, ‘Doc Groks Grocs‘, a Fantasy Grocery Delivery Service (Nasdaq:FGDS), is booming. Its clientele are tragically misunderstood, oblique-cursive housewives, dewy-eyed at his list-filling accuracy, not to mention buns of steel, who swoon in his wake.  No Astro-Physicist, Dad overlooked the skewed markings in question.  They remained completely unseen.

Parmesan (shaved), right beside Cheese (presumably some other type of Fromage with a five o’clock shadow?) and Lysol are all grouped together.  This alone might turn him into the doomed skipper of a Ghost Buggy, the Marie Celeste of Thrifty’s, endlessly drifting the aisles in search of deliberately ambiguated list items, foxily set in a ‘grouping’.

“T.P. Not the cheap shit!” The irony of this line-item was not lost on him.  It could not possibly be a ‘cheap shit’ with toilet paper at these fiendish prices. Did she use it for something else that he didn’t know about?

Then there’s ‘BSF‘.  BSF…WTF?????  No one on-staff at the store knew what ‘BSF’ might mean, nor did he have any luck in the parking lot, and in fact one woman shrank back in doubt & disgust.  It was as if he had asked, “Hey Lady, you ever heard of a Rusty Trombone?”  She beat a hasty retreat.  He stood awash in embarrassment for at least five minutes, pretty sure he had just been pranked by his very own wife.  One shudders at the thought of the furtive, distracted buggy maneuvering this episode caused. 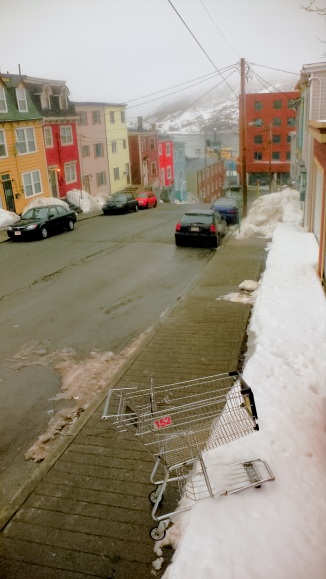 Fog of Battle causes a form of tunnel vision which wipes out annotations in margins. “Your Pills”, lifesaving Rx, is jammed far, far, to the left, where it will only be discovered much later, at which point Dad can either mount a second expedition, or quietly perish in the night.

He had a dream (an awesome dream obviously), possibly an 8.9 on the Lionel Ritchie Scale.

Similar to the dream that miraculously brought ‘Yesterday‘ to Sir Paul McCartney; it was fully formed, magically bestowed, and unifying like a profound truth.  Dad’s dream was not artful, but he thought it was probably worthy of a Nobel Peace Prize.

It was a Shopping List Template, to be distributed to the masses, freely, no strings attached.  He felt it would be a rope to drowning Dads everywhere, and his contribution to history.  Unholy chaos unleashed by Mom Lists would be silenced instantaneously, like putting a chart in front of a guitarist.  Never again would shopping become a Tribulation of Sisyphus.

The sheer elegance of this template still makes Dad tingle. He used it to great success.  He transcribed her mad scratching onto this ‘Nobel’ list, and found his shopping became a ballet, his pace adagio, sufficiently aplomb to lightly ballon through the Produce section,triumphantly executing a glorious buggy pirouette near the Fowl in a Sack dispenser.

NB: Field testing revealed user oversights:  Dad discovered after trial & error that if he could not touch an item, he didn’t actually have it, even if he was willing to swear he’d put it in the buggy.

Carefully he poked every item on the list with his index finger as it lay on the conveyor & muttered its name aloud.  It took several attempts to perfect this last painstaking step. But if he nailed it he’d treat himself to a chocolate dipped cone on the way home.

He added ‘Notes’ at the bottom when the cashier asked him if ‘he wanted his milk in a bag’.  Nonplussed, he replied, “No dear, just leave it in the jug.”