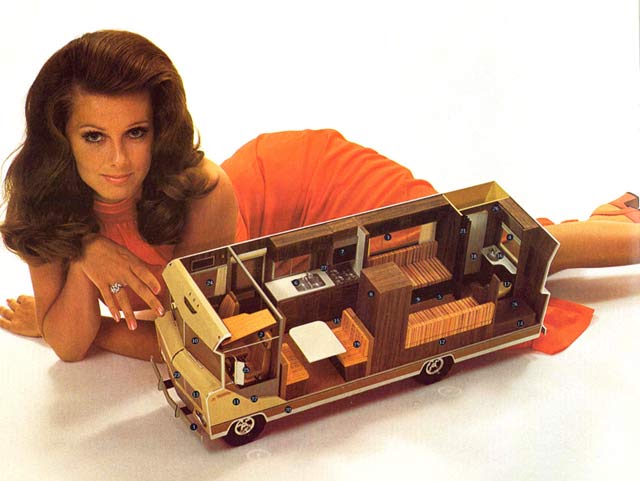 Enter the sleek iconic tour-bus, peopled by a rich and successful band. In it are televisions, Nintendo games, DVD players, lounges, bunks, kitchenettes, and of course a bathroom. The lighting is muted, the surroundings comfortable, the beer chilled and the prestige of having such a rolling palace very high indeed. But with the luxury comes the cost of such a bus. They suck up as much cash as they do fuel and so only groups who are doing very well can afford them. For the rest of the musical world, out there somewhere engaged in troubadorial toiling, there is the car, the van, the school bus, or sometimes ‘The Motorhome’.

Spend five minutes on the phone to find a ‘rental motorhome’, though, and you’ll realize that these beasts are unique among rental vehicles. You don’t simply ring up Budget and say, ‘Yo, we want a motor home, nice interior, lotsa power, and we want it red with white trim’. Rental motorhomes in this country are (as I discovered) nearly all owned by middle-aged German couples who only use them when they vacation in Canada, every two or three years. The rest of the time, rather than simply sit idle, they are rented out to other less investment savvy middle aged Germans for similar ‘kampfing’ trips in our great land. The rental of these road beasts is coordinated by small Mom & Pop firms who specialize in hooking up owners with prospective renters. Presumably they charge a small fee for the service and take care of the storage, upkeep and cleaning. Mom & Pop make everyone happy, supply Herr Tourist with maps and directions, sprechen a little Deutsch to make him comfortable, take a credit card impression (a mere formality) and then watch Herr & Frau Tourist drive off into the sunset, serene in the knowledge that anything rented to a middle-aged German couple is guaranteed to come back in better condition than it left. Mom & Pop have had little cause to interact with bands.

On one occasion, however, Mom & Pop were surprised by a phone call from Spirit of the West. Arrangements were made, bookings secured, and soon a motorhome arrived ready to take on Spirit of the West band, crew, gear and luggage. It was late winter and the weather was wet. Within three minutes the entirety of the heretofore Germanically clean floor was an inch deep in mud and sludge. We hadn’t even left yet, and so begins my tale.

It is five hours into the journey now, and the few square feet of floor space that had not been taken up with guitar cases or luggage is liberally sprinkled with Tim Horton’s cups, donut wrappers, cling film, crisp packets, sand, pebbles and various rubbish. The first order of business upon arrival at the destination is, of course, to unload. Everything comes out except the trash and the mud, which is now blended into a depressing miasma on the linoleum and carpet. Play the gig, pack up and move along to the next location. More Timmy’s cups, crisp packets, half eaten muffins, this time adding newspapers and lots of beer bottles to the mix. The Globe & Mail is belatedly employed as a floor mat in the vain hope that some of the sluicing muck might magically be absorbed into it. Round a sharp curve and a few of the beer bottles upset, spilling their flat dregs beneath the booted feet of the Spirits. This sludge shortly becomes a powerful adhesive, particularly good for attaching the Sports section to the sole of a Dr. Marten’s. Eventually the papers shred and turn the floor into a gerbil cage.

We are now on a high mountain road, loaded to the gunwales, fighting weather and traffic. The road is uneven and very bumpy. Our precious coffee pot falls off the shuddering stovetop and smashes to the floor. Uh oh, now there’s broken glass down there, and no longer does the weight of the pot hold down the burner which has begun to clatter violently. Someone grabs the whole stovetop, rips it from its flimsy moorings and tosses it into the sitz-bath shower stall (which is currently full of drums and empties). The noise subsides but a sharp swerve shortly thereafter sends Geoffrey Kelly, who had been standing, sprawling onto the aft bed. He reaches out to break his fall but his hands find nothing but a flimsy privacy curtain, anchored delicately by a couple of screws to the interior’s mock wood. The curtain and all its moorings tear from the ceiling, and Geoffrey further destroys it in trying to extricate from the mess. We all laugh.

Another gig, another load-in, more trash. The microwave oven is discovered to be functional, and it will replace the noisy stovetop which has gone missing anyway, possibly left behind on a loading dock or stuffed in with the drum equipment. Someone decides that soup, being comfort food, is in order for this long arduous journey. The broth is put in the microwave, set for perhaps two hours, and is totally forgotten. Sometime later a desperately exploded and rotting mass is found inside the previously useful oven. We now abandon our backup cooking apparatus.

Tour goes on. There are muddy footprints on the ceiling. Perhaps Hugh McMillan left them while Astral Traveling but the size of the print doesn’t seem to match. At any rate no one gives a shite any longer.

Home stretch – we organize the off-loading of equipment and personnel and by some strange ‘co-incidence’ it is I who must return what has now been dubbed ‘The Odour Home” to Mom & Pop. I reluctantly admit that my home is closest to the depot and submit to the duty. I am admonished to return it full of gas and pull in to the service centre to attend to this need. While waiting for the bottomless tank to fill I take the opportunity to throw out a couple of metric tonnes of garbage, a bail of newspapers, a sheaf of Subway wrappers, and about $65 dollars worth of empty beer bottles. I look around and say, “My, that looks a LOT better. Isn’t it something what a little tidy up can do…?”

I drive to Mom & Pop’s shop, park the vehicle and blithely stroll in with the keys. ‘Here it is thanks a lot see you later’ I blurt at high speed, hoping to beat a hasty retreat. But I must wait while they do a quick ‘walk around’. I wait, now tense, expecting to be confronted with our catalogue of fiendish motorhome crimes and misdemeanours. I review the events of the last few days, knowing full well that this motorhome, the precious vacation investment of some anonymous middle-aged German couple, has been nearly demolished. Almost nothing inside of it is clean or functional. Every appliance is a shambles, the upholstery is utterly ruined. The carpet is fouled beyond recovery. The curtains, tables and beds are torn, missing, or up-ended.

Presently Mom staggers into the shop, white as a ghost, looking as if she’d just witnessed a murder. Suddenly palsied, steadying herself lest she faint, Mom shrilly screams for Pop. With all the survival-acting skill I possess I feign surprise and ask if something is wrong. Agape, she stares at me as if I’m from an alternate universe, her jaw slack and flapping soundlessly. Pop comes rushing in, concerned; Mom just stabs a finger toward the motorhome in the parking lot, her eyes brimming with horror. A moment later Pop staggers back in, as if struck over the head with a hammer. Mom & Pop stare at each other, quite literally beside themselves, stammering nonsensically.

I again ask if something is wrong, hoping my mock innocence might soften the wicked blows, or at least deflect part of the maelstrom, all the while steeling myself for the blast of angry vitriol that is sure to come. Mom finally composes herself sufficiently to speak. She stutters, she stammers; I tense and prepare for a tsunami of abuse. Finally, choked with emotion her words come….”W-w-w-well… The GAS CAP is missing…”

I shake my head and clean out my ear with a finger. The gas cap? All in a rush my mind flashes to tours of Germany where we discovered that husbands wash their cars on Saturday, even if it’s completely unnecessary on an automobile already perfectly clean, sterilized, garaged and hermetically sealed, just so the neighbours don’t thing he’s a lout. I realize that a missing gas cap is a severe irregularity to Mom & Pop, an egregious, shocking lapse.

I am now doubly frightened because I am pretty sure, based on the gas cap response, that they haven’t yet looked inside the motorhome! Holy shit! Once they witness the destruction within I may have serious troubles on my hands. Putting on my best poker face I tut and cluck with mock concern about this terrible turn of events.  I am just an emissary, just a vague acquaintance of these awful, vandalistic bastards called Spirit of the West.  My long musician hair?  I am the neglected love child of old Hippies; I am purely focused upon World Peace, Guatemalan Folk Fest trousers and vegetarian cuisine.  I blame the missing gas cap on the menacing Geoffrey or the evildoer John or perhaps Satan himself, spin on my heel and flee like a scalded cat.

Though the plan is to ask Mom & Pop to call me a taxi, I realize it is wisest to run as if the devil Wendigo himself is on my heels, and run I do, about a mile down the road to a phone booth. There, I pull a hat and sunglasses out of my pocket, turn my coat inside out and wait for a taxi. As it arrives, I can hear in the distance a wailing ambulance advancing toward me.

I have absolutely no doubt where it is headed.

Photo: Johnny “Satan” Mann and actress, by unknown still photog on a film shoot, who I will be pleased to credit if I learn his or her name.